No matter what aesthetic you're into, the heat is on with these sexy hotels in Los Angeles ...

Just as everyone has their own opinion on where to find LA's best taco, everyone has their own spin on what’s sexy or romantic. Sure, stereotypically, it’s associated with the color red, dark creamy chocolates in heart shaped boxes, lush pillows filled with goose feathers, roses, silk sheets and so on.
So this Valentine's Day, consider something else or just hone in on what turns you on because LA’s got a hotel for every vibe you’re going for—from the stereotypical to playful to killer views. And let’s be honest, it’s mostly views and who you’re with ...

Beverly Hills
Vibe: Red Hot Hideaway
There ain’t no shame in being obvious. Sometimes we want a cheesy, overly “romantic” experience that’s straight out of a 2005 episode of Desperate Housewives. Lush red headboards give way to even lusher beds just screaming for you and your partner to go wild. 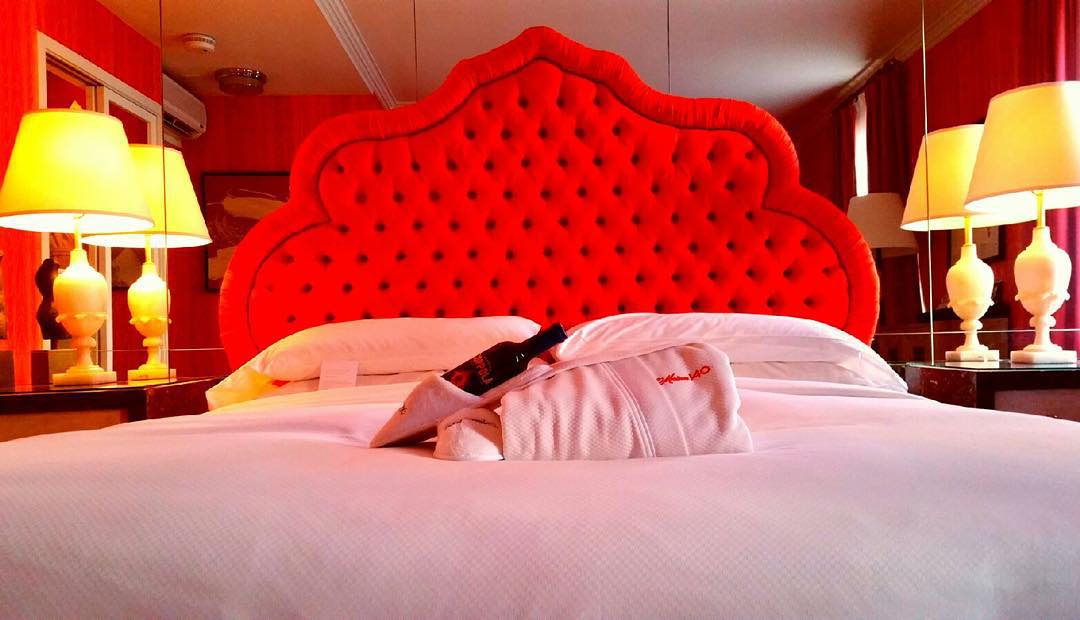 This hotel perfectly combines British sensibilities with California style. And, since there’s nothing to put you in the mood than a room with a view, score one of the Gate Suites for your own private balcony overlooking WeHo. From here, you can lounge in soft robes above the madness of Sunset Blvd. and the Pacific Design Center below, or roll in bed a bit longer with breakfast in bed from the hotel's Boxwood Cafe before heading to the rooftop pool for a mid morning dip. You stay classy London WeHo. 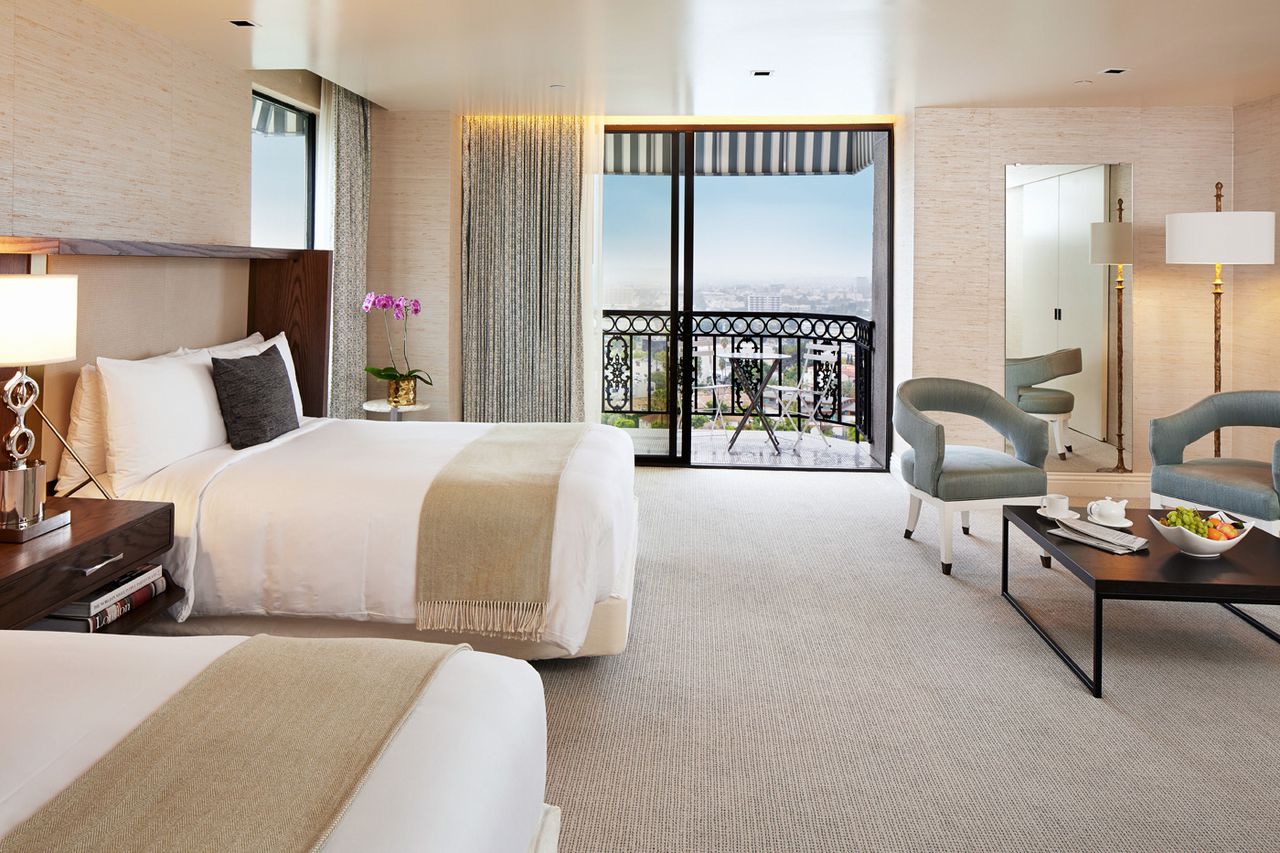 K-Town
Vibe: The Barbican Centre’s Party Girl Sister
Ah, brutalism. Those lines, that use of concrete, the sheer idea of it all being a way to achieve utopia through architecture and industrial materials. Oh, the modernity of it all!  And the Line brings the brutal to the contemporary by filling the concrete-walled rooms with pops of color via Coachella-inspired throws and curvy mid-century-esque furniture. It invites you in, begging to be touched, yet remains aloof—just like most unforgettable hook-ups are. But, hot damn that concrete will get your Brutalist heart a-pumpin’. Add in the egg-shaped bathtubs and this place delivers hot and heavy in calculated spades. 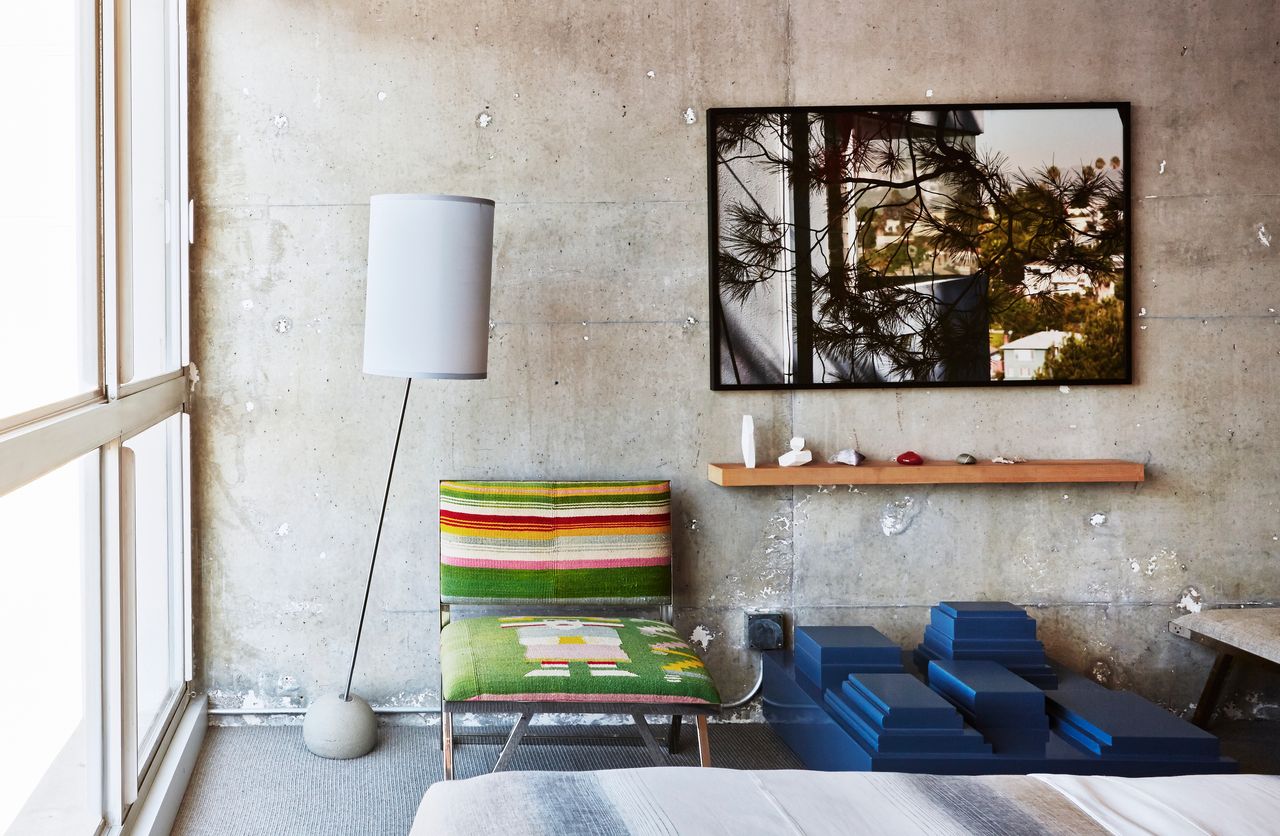 Santa Monica
Vibe: Ina Garten’s Beach House
As mentioned, there’s nothing sexier than a room with a view. At Casa Del Mar, you’ll be laying your eyes on the vast Pacific Ocean and the Santa Monica Pier. Although it feels a bit like a rich family’s Hamptons estate, seriously, what’s hotter than waking up in a lush bed to the sound of crashing waves? 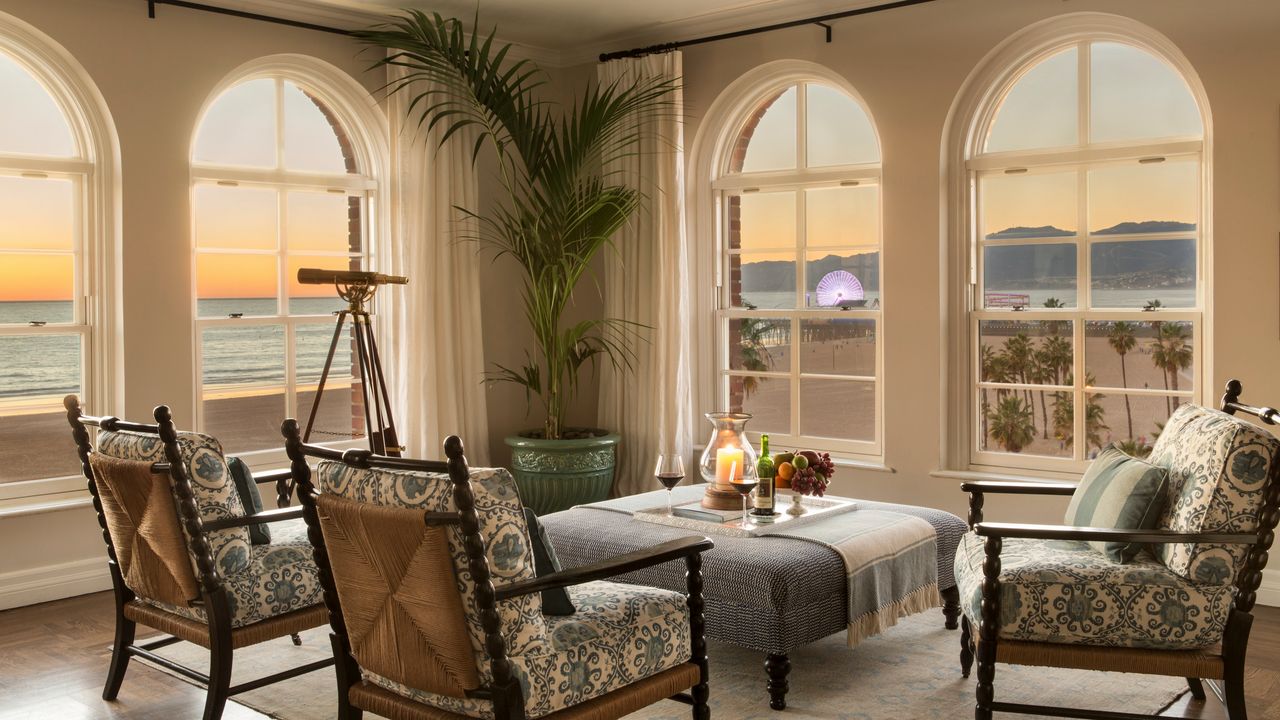 West Hollywood
Vibe: Father John Misty’s Beard
Do you feel like, in another life, you were a member of Rolling Stones or Band Aid or both? Then you gotta head to the Chateau Marmont. Here you can bask in the glory of the rock n' rollers and film stars who have called the Chateau’s hallowed halls home for a night or 20 or eternity (lookin’ at you John Belushi). Rolling through here will almost be like you’re Jim Morrison falling off a drain pipe into a sweet, sweet Serta mattress. And who doesn’t want that? 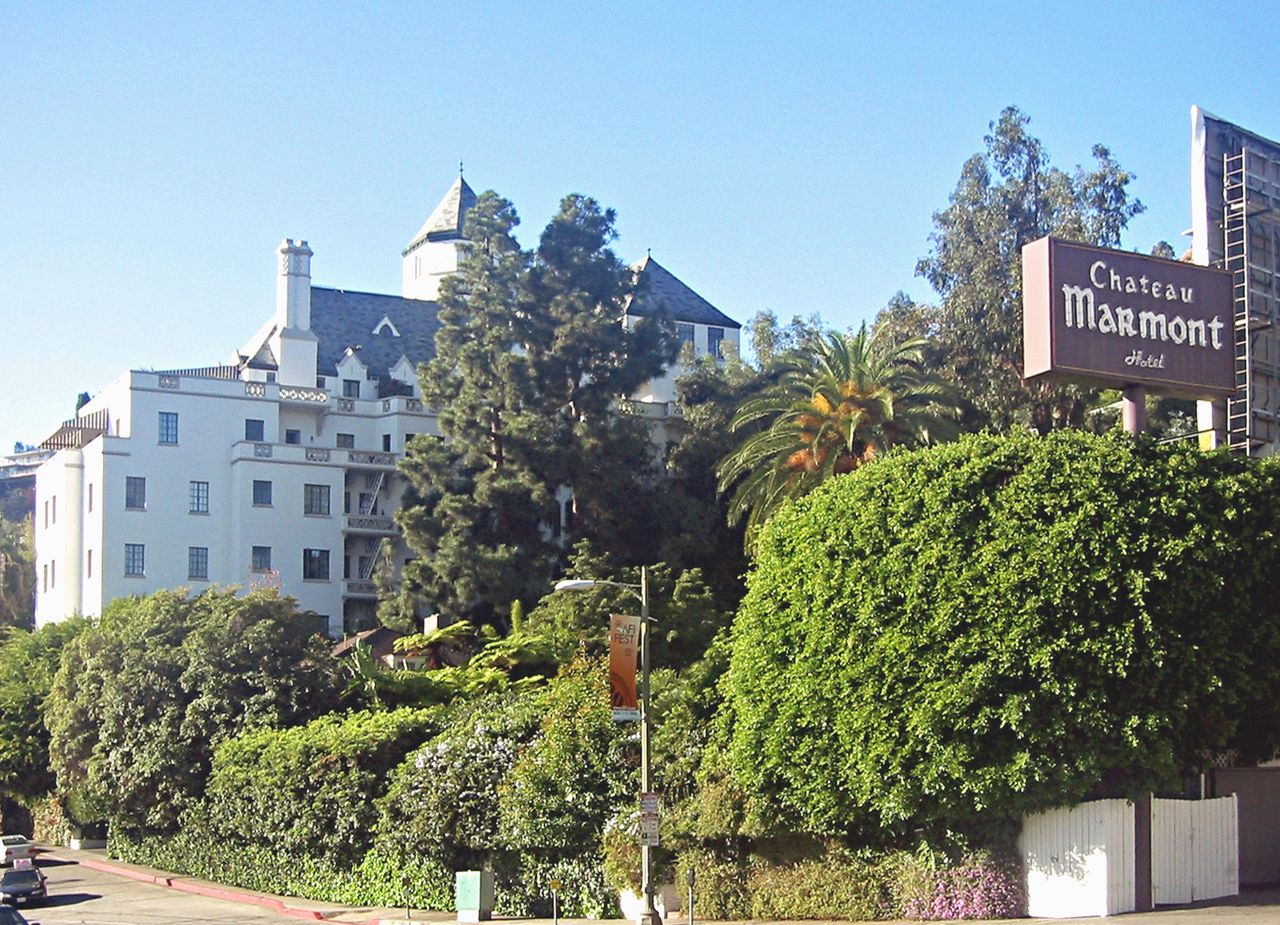 West Hollywood
Vibe: Art Nouveau of Baz Luhrman's Moulin Rouge
You know the elephant apartment in Moulin Rouge where Ewan McGregor and Nicole Kidman sing the most perfect pop jukebox duet in the history of cinema? How romantic and whimsical that was? Well, at the Petit Ermitage, the rooms definitely leave you feeling a bit more whimsical than when you arrived. But what really brings the magical romance and pure sex appeal is the rooftop pool and bar. Available only to hotel guests and members, it’s so damn hot, it’ll have you singing that Elephant Love Medley to the sky, and maybe your date. And the bartenders. And the cabanas. 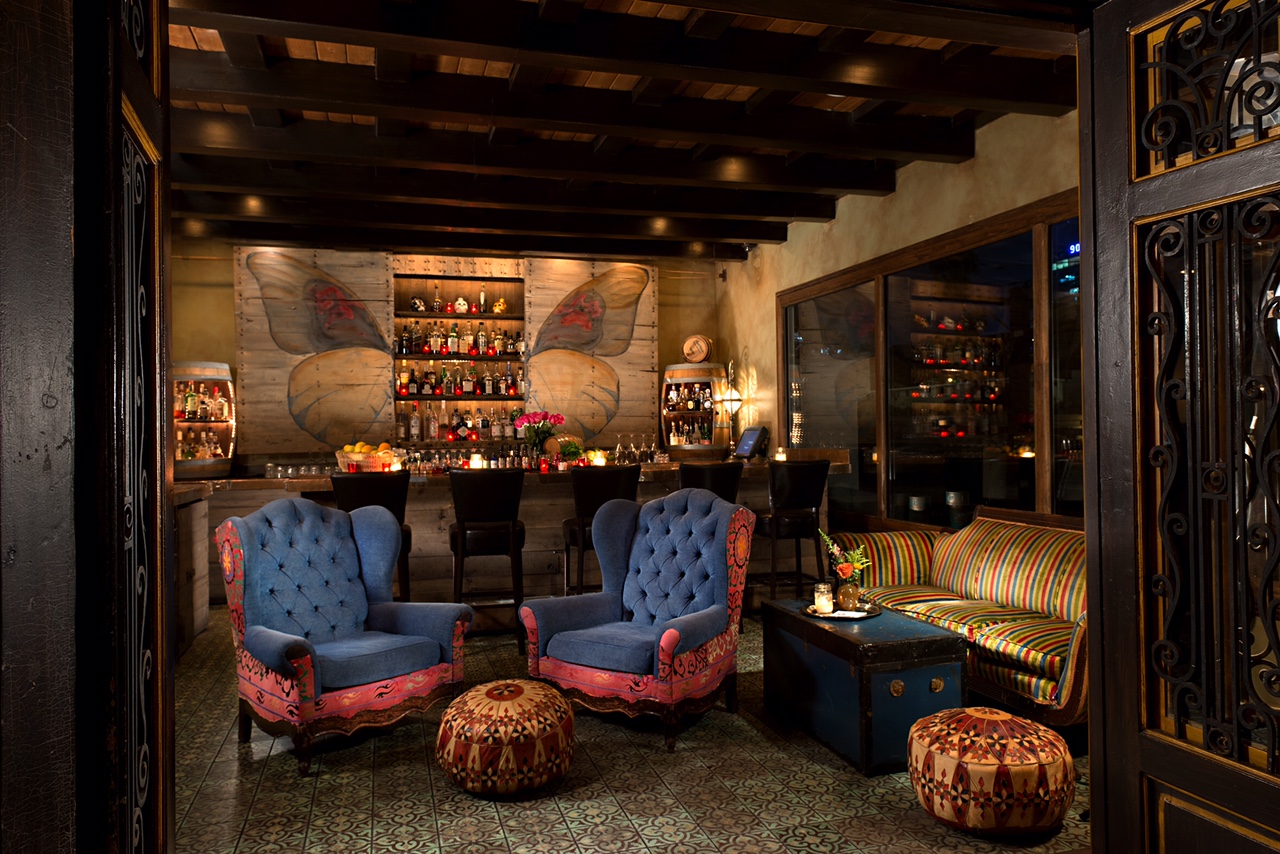 Melissa Karlin is a writer, photographer and professional social butterfly based in Los Angeles, California. She’s not an overly sexy person, but if you talk to her about the merits of brutalist architecture, watch out. Follow her misadventures on twitter @meli64 or on Instagram @informedwanderer.