Inspired by their new album, we cracked open "Scar Tissue", Anthony Kiedis’ autobiography, for a taste of RHCP’s red hot heyday in LA:

It takes serious grit (and perhaps whopping loads of luck) to survive 30+ years of rollercoaster rock stardom while staying true to sound, style and craft. Cue Los Angeles’ favorite sons: the Red Hot Chili Peppers, who—fun fact—formed back in 1983 after attending Fairfax High together.
Countless albums, awards, dollar signs and years later, they're still taking the world by storm. RHCP recently dropped their eleventh studio album, Getaway, with a worldwide tour underway. And let’s be honest: where would they be (or at least what would their lyrics be) if the City of Angels wasn't their playground? Well, it's a two-way street, because Los Angeles wouldn’t be the same without the Chili Peppers either. The Californication lifestyle personified in lead singer Anthony Kiedis’ lyrics are synonymous with Angeleno attitude.
Anthony Kiedis (originally born in Grand Rapids, Michigan), is just a normal guy who happens to be an absolute fucking rock star who embodies the musical spirit of Lady Angeles herself. From growing up in West Hollywood, to recording in studios on the ‘otherside’ of the canyon in the San Fernando Valley and fetching copious amounts of drugs in formerly sketchy parts of downtown LA (think Bonnie Brae and 6th), Anthony was front and center of the city’s golden rock ‘n roll years.
The Red Hot Chili Peppers’ unique and eternal blend of funk, hip-hop, and rock (among other genres) was mostly inspired by wild times, trials and tribulations spent in LA. Did you know Anthony wrote the lyrics for “Scar Tissue” while driving down the 101 freeway? The city was both their playground and their muse—and perhaps the defining factor to their signature sound.
Thanks to Anthony’s 2004 autobiography Scar Tissue, we get a glimpse into the frontman’s ascent to fame, and perhaps even more exciting for locals … it’s almost entirely set in, “the city I live in, the city of angels.”
Here are a few local spots mentioned in the book where Kiedis ate, played and wreaked rock ‘n roll havoc during their red hot heyday:

Fairfax, $$
This A 24-hour haven of great comfort food, people watching and joie de vivre despite the outdated decor and oddly colored furniture (including the crazy ceiling). Anthony mentions Canter’s as a place where he, Mike B. (AKA Flea), and Hillel, all friends from Fairfax High, would frequently dine and dash. Since then, Anthony has made reparations to the waiters and waitresses they once left with the bill. Very noble, Anthony. 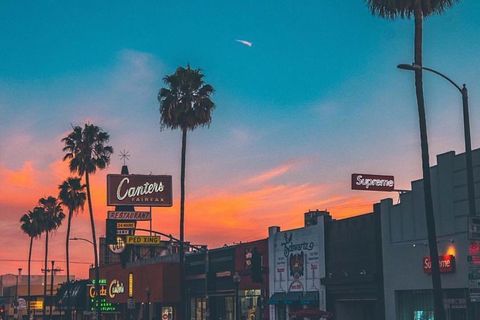 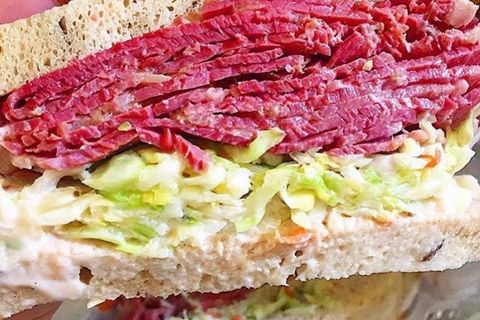 Brentwood, $$
Anthony gives it a shoutout for being the go-spot where where he and a fellow recovering addicts would “meet for a ritualistic breakfast of blueberry pancakes.” Formerly on La Brea Ave, the restaurant has been in its ‘new’ Brentwood location for over 20 years. Despite the location change, the pancakes still hold true. 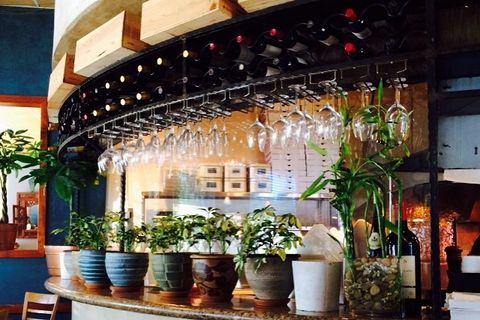 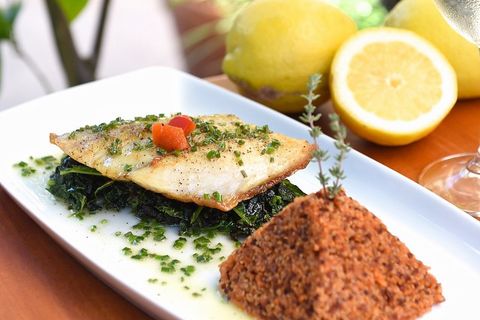 Fairfax, $$
Anthony mentions this as one of his favorite places … and rightfully so. The old-school feel and variety of restaurants, butchers, artists and candy shops is an awesome place hang when not full of tourists (i.e. avoid summer weekends). Walking through the OG Farmers Market always feels like going back in time—because you are. It opened in 1934. 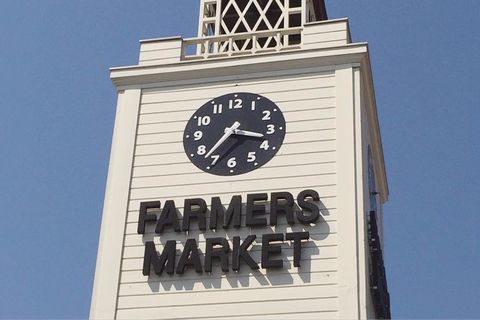 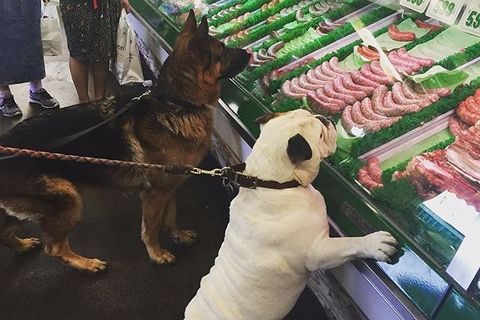 Harvard Heights, $
There are six locations throughout SoCal of this famous Mexican food joint, but the one Kiedis frequented the location on Western Ave. that opened in 1927. Try the LA Lemonade margarita and a round of the filet mignon tacos. 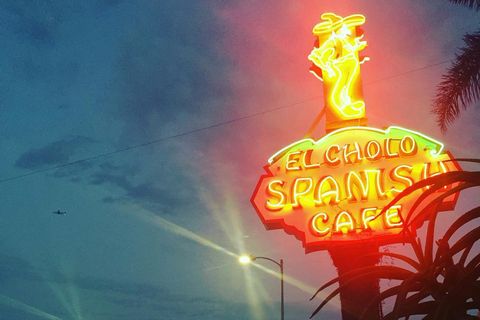 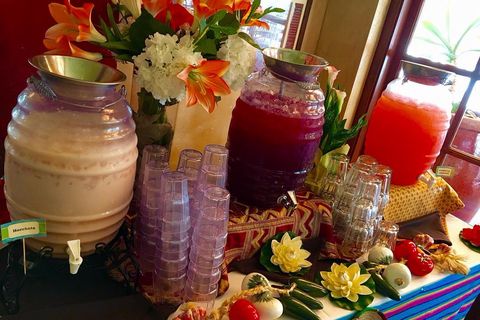 Hollywood
SIR Los Angeles is the premiere, one-stop-shop rental studio for rehearsal spaces, musical instruments, and equipment for local, touring and visiting musicians to rehearse in or with. Anthony mentions beginning pre-production on the Chili Peppers’ debut album in 1984 when the studio was on Santa Monica Blvd near Vine. Now, the studio is on Sunset Blvd.—just a stone’s throw from Amoeba Music. 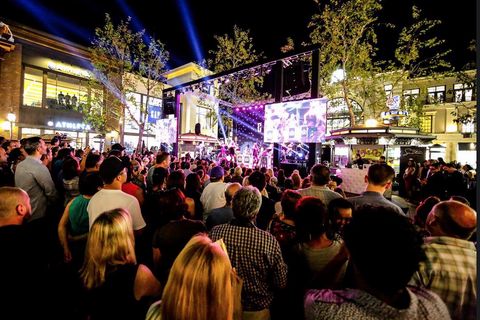 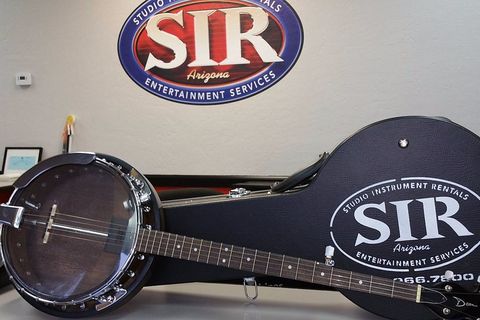 Hollywood
Anthony recounts playing two shows with Run-DMC in September of 1985, one of which was at this iconic Hollywood venue. The groups opened for Oingo Boingo, which was, at the time, Anthony’s biggest show to date. But actually, can you imagine the kind of energy and DGAF crowd at that show? Please email me your memories if you were there! 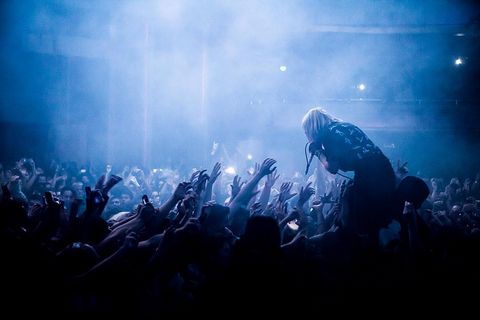 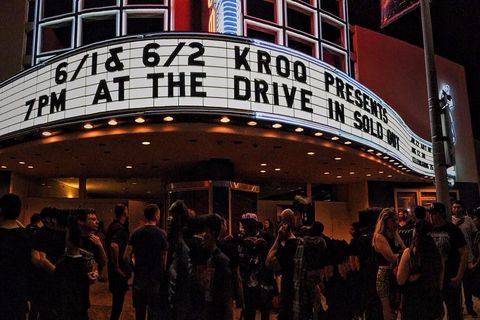 West Hollywood
Location, location, location. At the heart of the Sunset Strip and next to the Rainbow Bar & Grill, the Roxy has been a cultural institution and one-night home to countless musicians and groups since 1973. Perhaps the most memorable Chili Peppers performance here went down in 1987 when, during a cover of Hendrix’s “Foxy Lady,” a nearly bare-chested woman begins “dancing on” Anthony. The bass player for Fishbone joins the party to create a “hippie girl” sandwich, before Kiedis’ then girlfriend (yes, the girl who’s dressed as a unicorn?) bolts onstage to break up the threesome. Watch the whole crazy scene unfold here. 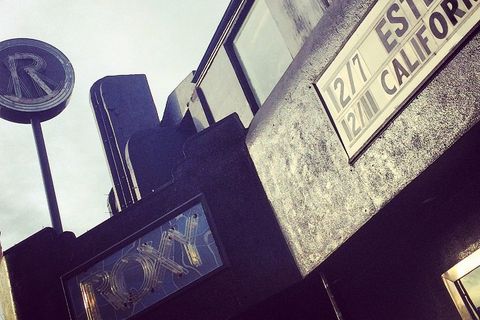 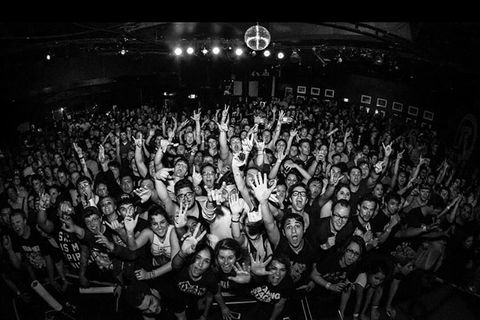 Hollywood
What is more iconic: the Capitol Records Building itself or the legends who have walked through its doors? Hard to say. Anthony writes of recording in the basement of the building for their third album, The Uplift Mofo Party Plan in 1987. 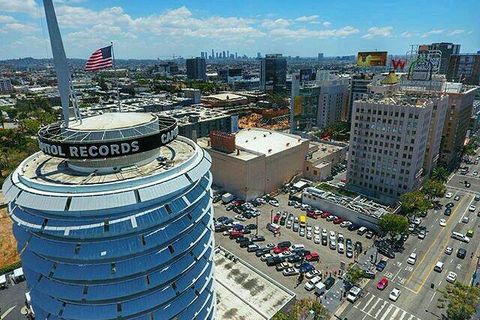 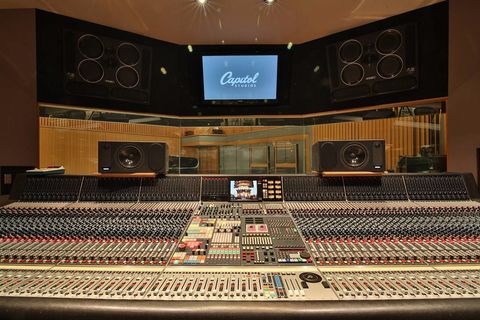 Inglewood
Between playing gigs and attending Laker games, Anthony and Flea have spent a fair amount of time at Inglewood’s fabulous Forum. They put on a great New Year’s Eve show in 1999 after an allegedly not so great show a few years prior. It seems difficult to imagine a better setting for seeing this Angeleno band. Though no longer home to the Lakers, The Forum remains a premiere venue for top acts to perform. 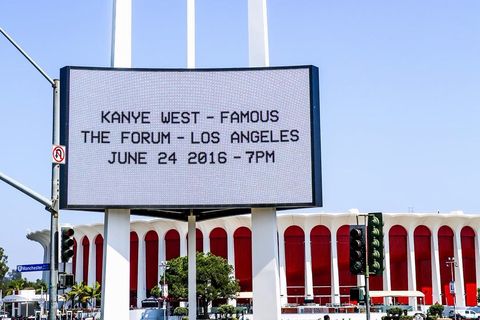 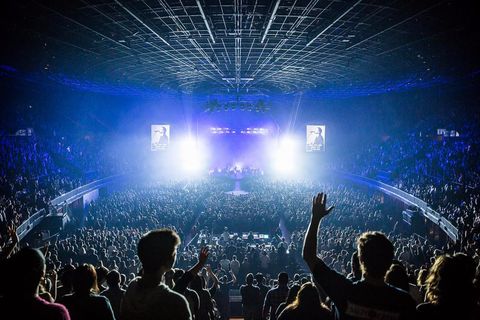 Atwater Village
A local rehearsal house, most likely inception home to some of Anthony’s creative love baby lyrics. Kiedis mentions writing and rehearsing new material for the 1999 Californication album at Swing House, and yes Rick Rubin was probably there. The studio was on Cahuenga when the band was there, and is now in Atwater Village. 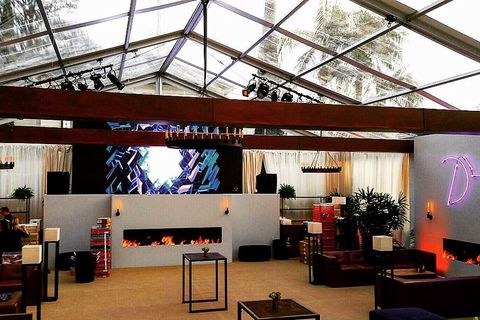 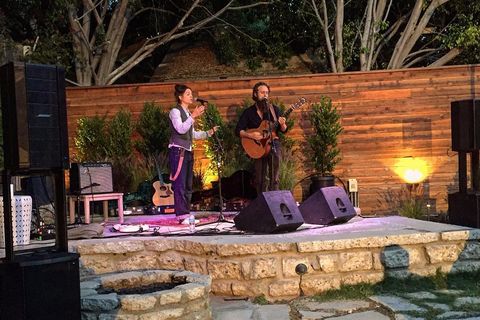 Fairfax
That place where “those guys” met and started a band. Fairfax High still boasts an excellent basketball team (Flea seems to be a frequent to the games) and the nearby Melrose Trading Post on Sundays. 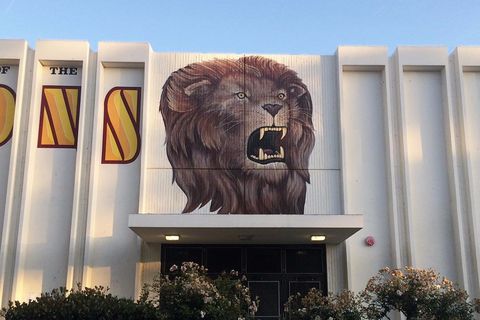 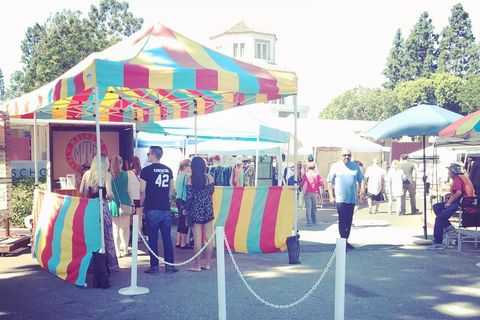 West Hollywood
We would be remiss to talk LA rock ‘n roll without mention of this history-filled, twisted step-sister of a landmark that we are all fixated on. Anthony’s dad, Blackie Dammit—the Lord of the Sunset Strip (as he was known as during his heyday) was known for being the force behind “the power table” at the Rainbow, where he would bring teenage Anthony to hang. Anthony goes into eye opening detail of time spent dressing the part for The Strip in its prime, mixing and consuming drugs like no tomorrow and chilling with the likes of Keith Moon and members of Alice Cooper (among others, we can safely assume). 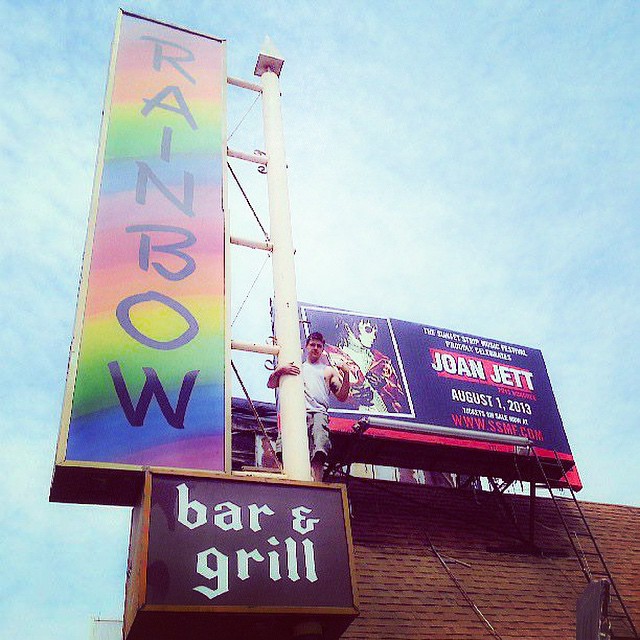 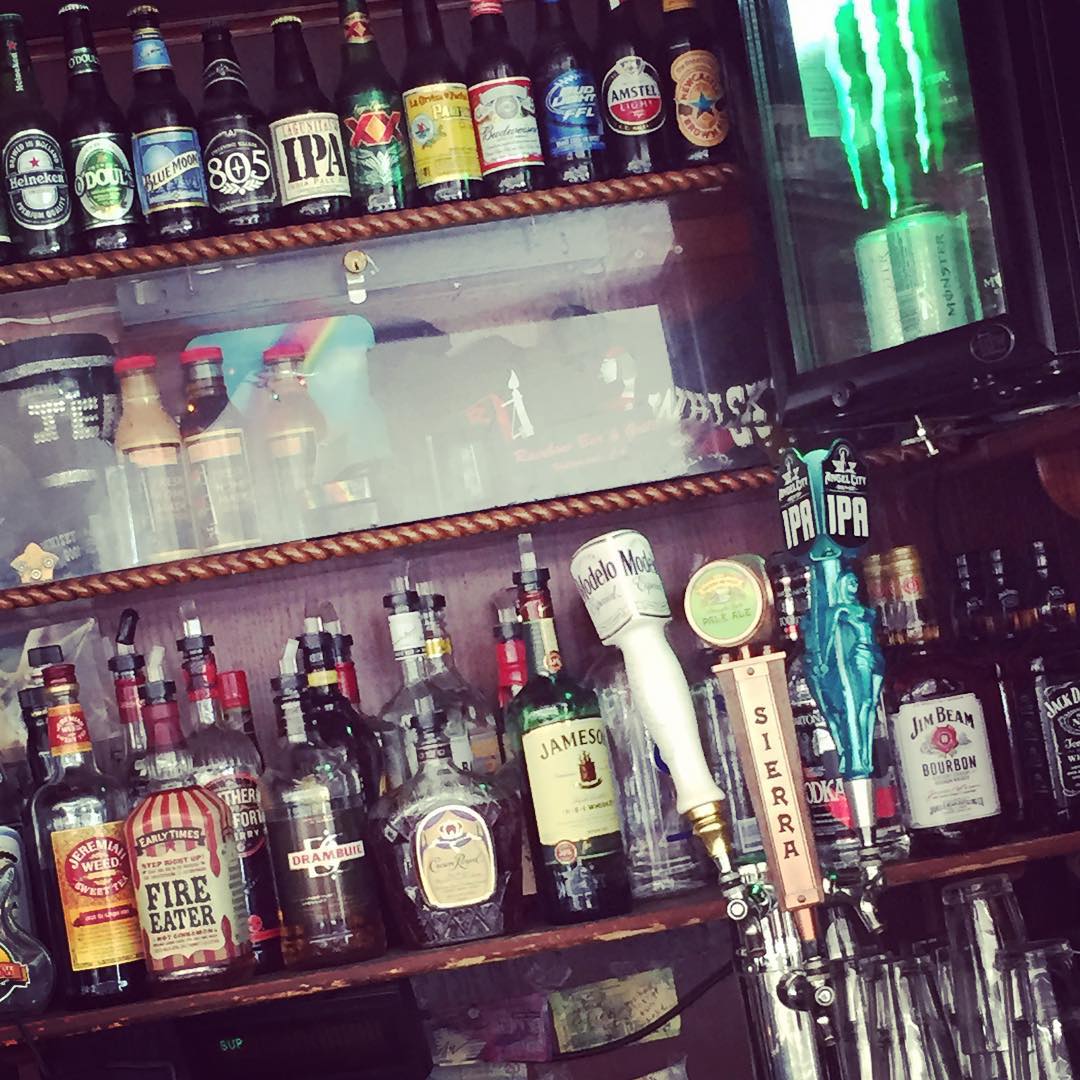 Beverly Hills
Yes, the hospital is in the “HANG” section. Anthony mentions at last three separate accidents that would lead him to Los Angeles’ best hospital. 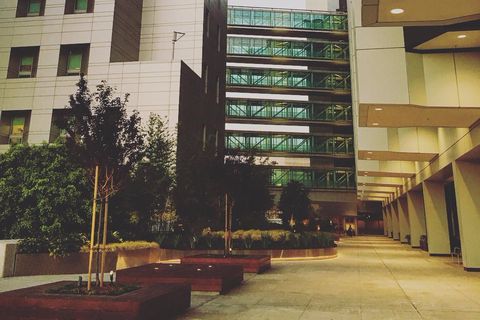 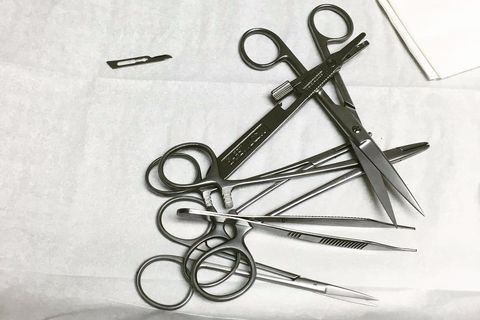 Hollywood
Yes, a cemetery! This is where co-founding Chili Pepper, Hillel Slovak, is buried. Slovak overdosed on heroin, and much to Anthony’s disbelief and rage at the time (he was also battling  his own demons at the time), Anthony was not in attendance for Slovak’s funeral. Regardless, Slovak’s contributions to the sound and style of the band is never forgotten, as he is never far from home in this hillside cemetery. 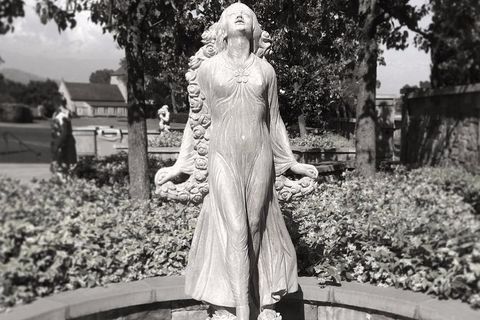 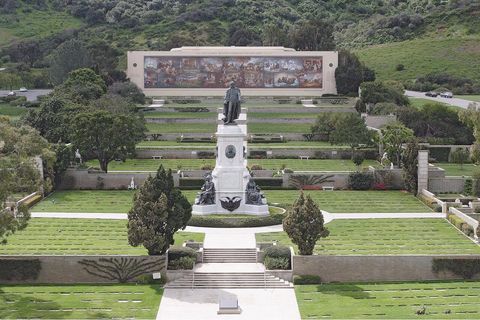 West Hollywood
Can a rockstar really be a rockstar if he or she hasn’t spent time at the Chateau? Anthony also once upon a time lived just up the street from the iconic hotel in the celebrity-centric Colonial House. 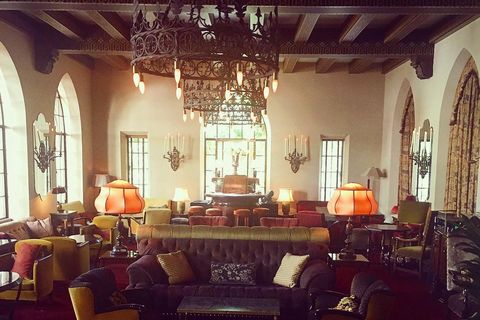 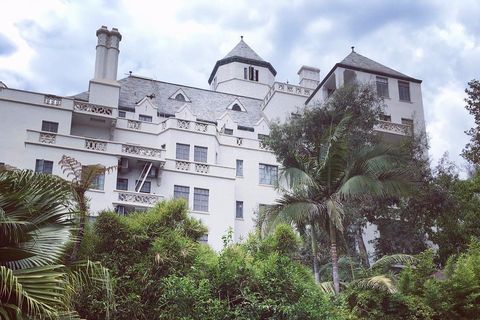 Justin lays down the law (no slapping) as the resident bass player for a blues-y/garage/rock/alt band. His Mount Rushmore of living, raised Angeleno rock 'n roll songwriters would include John Frusciante, Josh Homme, Brian Wilson, and Phil Spector. You can see what captures his imagination @justwager.
Header image by Steve Keros